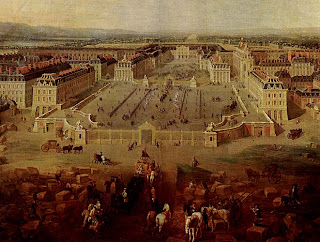 Bonjour Mes Amies!  As I greeted the dawn with a stretch and a yawn, images of eighteenth century Versailles flickered in my brain (Do not be alarmed, this is a common occurrence which causes me very little discomfort.)

I thought of the card games, horse races, musicals, and theatricals once hosted by my most beloved queen, Marie Antoinette.  Soon, I was longing to be transported from my time to that distant, glorious era.  As lovers of past often do, I found myself focusing on the romantic aspects of that time and ignoring the grittier, less lovely aspects. 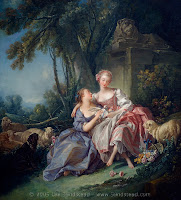 Take a look at this engraving produced in the eighteenth century depicting a masked ball held for Louis XVI and Marie Antoinette.  The ball was held on January 23, 1782 to celebrate the birth of the Dauphin, Louis Joseph Xavier François.  The birth of dauphin had been highly anticipated from the moment his Mama stepped her stylish foot in France.  And so, when Marie Antoinette delivered a healthy prince with bow-like lips and wide blue eyes on October 22, 1781, the court had cause to celebrate.

Paris, with its penchant for parties, waited the requisite period before throwing a soiree fit for a king! (Since the mortality rate for infants was high, the court waited a period of time before officially celebrating the birth of a royal infant.  They wanted to make sure a dauphin did not ascend from his royal crib to Heaven before lighting the tapers and popping the corks!)

It is easy to gaze upon the engraving of the Dauphin's Masked Ball and imagine the chandeliers being lowered so liveried footman could light their numerous tapers, and the light that must have reflected off the crystal pendants, bathing the ballroom in an amber glow.

It takes little effort to visualize the dashing noblemen in their powdered periwigs, embroidered waistcoats, and red-heeled shoes.

With little effort, one can close their eyes and conjure scenes of a beautiful lady in a towering wig, a pox patch strategically pasted just below her right eye, giggling behind her fan.

Can you taste the wine on your tongue?  Hear the tinkling laughter of your fellow revellers?  Smell the rose water you splashed on your wrists before departing for the evening?

It all seems so grand, doesn't it?

But things weren't always what they seemed...


Those chandeliers?  The wax often dripped on the people below, burning exposed skin, ruining expensive and time-consuming hairdos, and making the dance floor a sticky mess. Ladies lived in fear of the wax ruining their expensive gowns.  Fortunately, a good maid/valet knew how to remove wax from any garment. 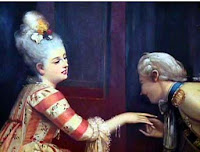 The dashing noblemen?  Many of them attended balls so they could engage in one of two things: scheme to advance themselves at court/plot the destruction of a rival at court or meet the woman who would become their next liaison.  (Most aristocratic unions were orchestrated between the families far from the romantic swirl of the ballroom and were for practical, financial reasons.  Passion rarely played a part of courtship)
The lovely ladies?  18th century French noblewomen spent weeks planning their wardrobe for a big event, fretting over fabric and color choices.  Wearing an unfashionable gown or unflattering shade of puce would open the lady up to ridicule and social exile.  On the afternoon of the event, she would spend hours seated in an uncomfortable, low-backed chair, dressed in a chemise and powdering gown, while her physiognomist labored to arrange her coiffure.  Height was essential so horse hair pads were often used to elevate her tresses.  It was not uncommon for women to spend upwards of three hours in the stylists chair only to find their hair had been teased to such a great height that they could not fit in their carriage without sitting on the floor. Some women opted to stick their heads out their carriage window.
Some women suffered from hair loss, eyestrain, and headaches because of the constant torturous manipulation of their tender tresses. Pests were another very personal and real problem. Fleas and lice infested some of the most genteel heads in eighteenth century Paris. Indeed, women of fashion often carried long, thin sticks with claws at the end for scratching their scalps. 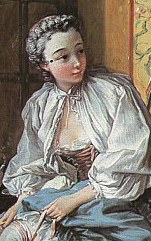 And those pox patches?  Oftentimes they covered deep, unsightly pits left after a bout of smallpox.  Pox patches could also be used to cover scars left from venereal diseases or sores created from the lead-based face paint used by ladies of the era.


The revellers?  Excessive drinking, gambling, and vicious gossiping were popular entertainments.  (Might I suggest that my gentle reader watch the movie Ridicule for a better understanding of the indulgences of eighteenth century French aristocrats?)
The scent of rose water?  Although personal hygiene had come a long way since the Dark Ages, many people living in the eighteenth century still believed that bathing allowed diseases to enter the bloodstream through the pores.  They would often attempt to cover their offensive aroma by dousing themselves in pungent perfumes.  Men preferred musk and ambergris based scents, while ladies often opted for floral and citrus based scents.  Aristocrats wore multiple layers of heavy garments, even in the summer.  In a time before air conditioning, it takes little effort to imagine the insanely odoriferous emanations that must have filled the salons and ballrooms.


The wine?  18th Century Frenchmen and women loved their wine.  Did you know Parisians drank around 700,000 litres per year?  Unfortunately, some unscrupulous wine merchants diluted their product with water (from the Seine) or allowed rat feces to tumble into their vats.

I must confess, despite the rampant rodents and ridiculing aristocrats, I still daydream about life in the time of Marie Antoinette.  If providence suddenly allowed me to whisk through time and visit Versailles in the eighteenth century, I would gladly perch upon a low-backed chair and allow Leonard to tease and torture my tresses to a magnificent mass!

What about you?  Would you visit 18th Century Versailles? 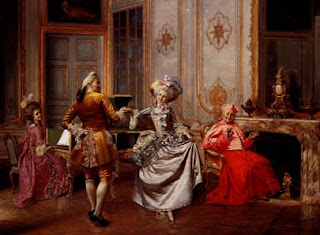