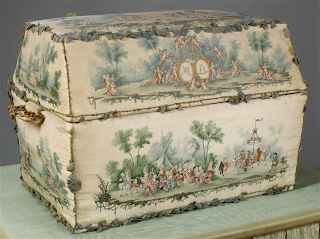 This lovely, little chest was made for Marie Antoinette's second child, the dauphin, Louis Joseph, on the occasion of his birth. The interior of the chest is lined with white taffeta. The exterior is decorated in an allegorical style with mythological subjects and scenes of people rejoicing. The figures of Louis XVI and Marie Antoinette crowned by Cupids have been painted on the lid.

One can't gaze upon this chest and not wonder about the treasures that once filled it.  Did a heavily pregnant Marie Antoinette place lace bonnets or silver rattles inside?

As he grew, did Louis Joseph use it to store his beloved toy soldiers or wooden horse?

...Some of Louis Joseph's brother's toy soldiers are on display at the Musee Carnavalet in Paris?

...After the birth of Louis Joseph, Louis XVI was reported to have been seen strolling around the palace with a beaming smile upon his face.  He would often say, "The dauphin, my son..."

...Louis Joseph was the twenty-sixty dauphin of France?

...Louis Joseph was said to have been an exceptionally sweet, loving, and intelligent child?

...Marie Antoinette wrote of her son, "One hip is higher than the other and the vertebrae of his back are out of place and protruding."

...Louis Joseph was a sickly child and spent much time in bed, in pain.

...Poor, sweet Louis Joseph died of tuberculosis on June 4, 1789.  The king and queen were bereft.