France underwent dramatic changes during the 18th century. Liberating thoughts and rhetoric inspired great shifts in politics, economics, industry, religion, and society. These new ideologies and shifts had their effect on women's fashions.

Never was the saying, "Slave to Fashion" more apropos than in the 18th century. Women spent a lot of their time, money, and effort cultivating and perfecting their image. They pored over the drawings in the new and popular fashion journals, Le Cabinets des Modes and Le Belle Monde. They attended the theater, hoping to gain inspiration from the elaborate costumes on stage. As a result, their gowns were wide and dramatic. Hair styles and headdresses were equally theatrical, and oftentimes outlandish.

The British Are Coming

The French were fascinated with all things British, and closely followed that country's fashion dictates and fads. Elaborate gowns like the robe a la francaise, which had numerous pleats, were replaced by the robe a l'anglaise, which conformed more closely with the body. French fashion mavens could be seen wearing a version of the English riding coat, called a redingote.

The image at the right is of the scandalous Lady Worsley

wearing a smashing redingote.  This portrait was completed shortly after her disasterous marriage.

That Marie Antoinette set many of the styles at court is indisputable. During the beginning of her reign, Marie Antoinette's fashions were elaborate and larger than life. Her gowns were immense affairs, with hooped pannier's, layers of of petticoats, flounces, and bands of lace. "When the Queen passed along the gallery at Versailles," noted an observer, "you could see nothing but a forest of feathers, rising a foot and a half above her head, and nodding to and fro."

During the latter part of her reign, Marie Antoinette adopted a simpler style of dress. She wore gowns, called chemise a la Reine, that resembled a shift and was made of muslin. It was free-flowing and comfortable. For women that were accustomed to dressing in restricting and cumbersome fashions, the Queen's new attire was fresh and liberating. She topped her rustic, wholesome gown off with a straw bonnet.

We Hate Them, But Love Their Style 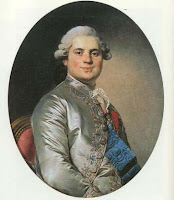 For as much as the French opposed a monarchial state and proclaimed to detest Marie Antoinette, they certainly named a lot of fashion items after the Royals. Prune de Monsieur was a shade of purple worn by the King's eldest brother and often used in velvet coats or gowns. Robe a la Reine was a beautiful gown with an underskirt, an overskirt, and a bodice. Decorated with cords, tassels, and rosettes, this gown was named after Marie Antoinette. A gorge a la Gabrielle d'Estrees, was a risqué neckline named after the mistress of Henri IV.

Fashions began to make serious political statements during the later part of 18th Century. Ladies who wore the colors red, white and blue indicated their patriotism. Their gowns, shoes, and even the plumes on their hats could be dyed red, white and blue. Pins with revolutionary slogans and shoe buckles depicting the Bastille could be purchased at various shops around Paris.

Black was a neutral color which could be worn to indicate loyalty to the revolutionaries or the the royalists. 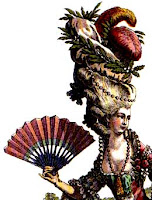 Ladies fans also served a duality in purpose: to keep the owner cool while establishing her political affiliations. Many fans were hand-painted with symbols, slogans or portraits of Revolutionary or Royal Leaders.

To see a spectacular pair of French mules with tricolor cockade from 1792, please click here.

Fashion For The Masses
The French Revolution helped to blur the lines between the classes. Suddenly, pursuits that were once considered singularly aristocratic, like fashion, were open to the masses. In 1799, there were over 1700 dressmaker's shops in Paris. Any woman with the inclination and the means could visit a modiste and be outfitted like a queen!


Though Marie Antoinette ceased to exist, her influence on style could still be felt. The Empire Gown, popular during the final years of the 18th century and early years of the 19th century, was an evolution of her chemise. Perhaps it was the attitude Marie Antoinette adopted and not the dresses which left the most lasting mark. Women were no longer content to be sheep in the fashion pasture, and more likely to be the lone wolf by taking fashion risks.