Today, if someone would like to hear the prodigious pontifications of a political pundit, they need only turn on the television.  Stephen Colbert, Glenn Beck, Rush Limbaugh, Dennis Miller, and a dozen other sanctimonious, self-impressed savants zealously spew their political ideologies and fears on the masses on a nightly basis.

Televised political commentators might be products of this century, but making a living out of lambasting leaders is hardly revolutionary.

But what happened once the King and Queen were imprisoned?  Did the cartoonists set down their pen and ink and learn a new trade?

In fact, they seemed to churn out more cartoons than before the Revolution.  Here are a few political cartoons I have collected through the years.  I have included a brief explanation of each image.

A Democrat...Or...Reason and Philosophy
By James Gillray
James Gillray was a popular (or unpopular, depending on the point of view) British printmaker and political and social lampoonist.  He drew many cartoons that poked at the French Revolution.

In the cartoon to the left, Gillray has drawn the British politician Charles James Fox as a sans-culotte.  Notice that the rotund, flatulent figure is not wearing pants.  Fox, a notorious libertine and hedonist, becomes a symbol of excess.  In the case of the French Revolution, Gillray was a conservative who believed the sans-culottes were corrupt, violent and extreme.  In one fell swoop, Gillray lampoons a British politician and the revolutionaries and makes a social/moral comment on the dangers of excess and unchecked power.


The People of the Ancient Regime 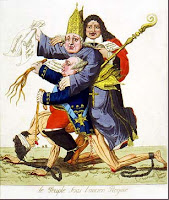 Before the Revolution, the people of France were divided into three groups. These groups were known as the Three Estates. The Clergy and The Nobility were the first and second estates. They held all of the power and were exempt from taxes. The Third estate was comprised of the bourgeoisie (middle class), the workers, and peasants.
This cartoon depicts the The First and Second Estate riding on the broken back of The Third Estate. The message is clear: the fat, greedy nobleman and clerics of the Ancien Regime, with their lavish parties and opulent chateaux, literally broke the backs of the peasants (tax payers) who made it possible for them to live large. 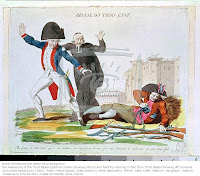 This political cartoon was printed and distributed during the Revolution.  Like the cartoon above, it depicts the Three Estates.  In this cartoon, however, the Third Estate (the middle and lower classes) are throwing off the manacles of their oppression and preparing to rise up and take arms against their oppressors.  In the background, looms the Bastille, the figurehead of the Revolution.

The Hopes of the Party, prior to July 14th — From such wicked Crown & Anchor-Dreams, good Lord deliver us

In this cartoon, James Gillray is again lampooning Charles James Fox and the French Revolution.  The man about to be decapitated is George III.  The man swinging the axe is none other than the corpulent, lady-loving, wily Fox.  Gillray is calling Fox and his party radicals, who, if left unchecked, would bring about the same terror in England as was happening across the Channel.

It's obvious this British cartoon is meant to poke fun at the men of France. The foppish man on the left is dressed in the garb of the Anciene Regime, with pointy-toed slippers, silk stockings, tight fitting waistcoat, powdered wig, and flouncy shirt. He stands in direct contrast to the proud, more masculine gentleman of the court of Egalité, who is wearing leather boots, the bi-corn hat of a sailor or soldier, and a sneer. Note, too, that there is a heavy wooden club protruding from the revolutionary's pocket. The bowing aristo is supposed to appear weak; the sneering revolutionary arrogant. 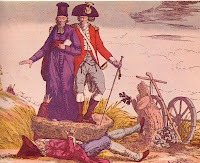