Even garbed in the finest Prada loafers and Armani suit, today's metrosexual male could hardly compete with the prodigiously pampered and preened nobleman of eighteenth century France, who elevated attire to an oft emulated (but rarely rivaled) art form!
Monsieur le Noble's wardrobe included satin jackets and waistcoats  embroidered with silver or gold threat, Jabots and sleeves made of Bruxelles lace, diamond encrusted shoe buckles, silk court shoes with high heels, silver-handled walking sticks, powdered wigs, pox patches, and a myriad of expensive accouterments that were considered prerequisites - nay, necessities - for any well-connected courtier.
But what did Monsieur le Noble wear when he was not honing his sharp wit at a literary salon or tripping over his red-heeled slippers to curry favor with his monarch?  What did our dashing Duc wear when he was en dishabille?
A banyan, naturellement.

"The banyan, a fashionable and loose man's indoor garment made with exotic fabric, is thought to have originated from the gown worn by the Hindi in India.  From the seventeenth century it was used for indoor wear over the shirt and breeches with a cap instead of a wig and was also apparently worn for receiving close friends at home or for morning walks."  [Historical Fashion in Detail, by Avril Hart]
If you would like to read more about the dressing gown - and see well-preserved 18th century dressing gowns - you can visit The Brighton Costume Museum.  (It seems rather fitting that a well preserved banyan would be found at the museum in Brighton -  as Brighton was the city that once acted as a magnet for everyone and anyone who was in fashion...particularly Beau Brummel and the men of Prinny's set)
Other 18th century banyans can be viewed here and here.  Oh, and one more here.
Watching da Bears in a Banyan:

Tired of seeing your man pad around the house in sweats and football t-shirts? Why not buy him a custom made banyan? Think how much more dashing he will appear in his banyan. You might even forgive him for leaving his Diet Coke cans on your antique bombe side table, hogging the covers, and forgetting to put the toilet seat down!
Click here if you would like to order a custom made banyan for your gentleman.
Portraits of Men in their Banyans: 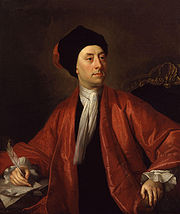 
Benjamin Rush in a voluminous salmon banyan.
Alphonse Leroy was obstetrician who lived and worked in eighteenth century Paris.  His portrait, painted by Jacques Louis David, features him wearing a red iridescent silk banyan and Indian inspired turban.
Allan Ramsay in a self-portrait, wearing a velvet and silk banyan. 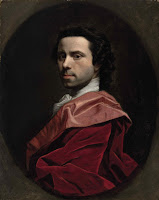 Jean Baptiste Rousseau, the dramatist and poet, enveloped in a black silk banyan with a spectacular red chinoinserie-inspired lining.
Nicholas Boylston, a wealthy, eighteenth century Bostonian, wearing a voluminous cocoa-hued chintz dressing gown as painted by John Singleton Copley.
And finally, Sir Isaac Newton, in a portrait painted later in his life by Thornill.  Notice Sir Isaac is wearing a fairly fabulous bronze, iridescent silk banyan with chintz lining.
I'd love to have you join my coterie. Won't you please click the "Follow" button on the right sidebar?
Further Reading on 18th Century Attire:
The Cut of Men's Clothes: 1600-1900