"Among all our circle of friends," one observer wrote, "at all our meals, in the antechambers of our lovely women, as in the academic schools, all one hears is talk of experiments, atmospheric air, inflammable gas, flying cars, journeys in the sky."

Ballooniana is a term used to describe the proliferation of paintings, prints, ceramics and bric-a-brac produced in the late 18th century to commemorate the first successful balloon trips, which took place in Paris in 1783. 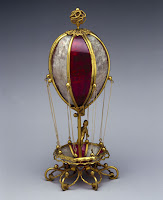 This titillating treasure, a gilded and glass model of a hot air balloon, is from the Penn-Gaskell Collection of Ballooniana.
Designed in a similar fashion as a Faberge Egg, the balloon opens to reveal four tiny glass perfume bottles.  Can't you just see it sitting on a tulipwood table in a noblewoman's boudoir?  Perhaps the bottles were filled with orange water, essence of jasmine and tuberose, or the musky-scented oil of ambergris.

The sculptor Claude Michel, also known as Clodion, designed this magnificent statue to celebrate the advent of ballooning.

Hovering above a round, altar-like base carved with flames, is a hot air balloon.  Notice the allegorical images on the statue - the flames and angels. 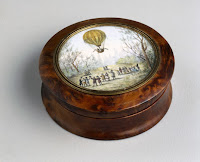 This wooden snuff box has a painted ceramic lid.  The image on the lid is a depiction of Dr. Jacques Charles and Nicolas-Louis Robert during one of their first manned balloon flights.  You will notice, a thoroughly titillated crowed has gathered to witness the spectacle!

Charles and Robert launched the first unmanned hydrogen filled balloon in August of 1783.

On December 1, 1783, the duo stepped into the basket of their balloon and ascended high in the sky above the Tuileries Gardens, thrilling the crowd of spectators (including the clever Benjamin Franklin and the cretinous Duc de Chartres) who had gathered to witness the historic event.  They remained aloft for over two hours, eventually landing in Nesles-la-Vallée.