If you are fortunate enough to live in or near New York City, please stop reading this blog, step away from your computer, and head to The Metropolitan Museum of Art.
One of the exhibits currently on display at the museum is Pastel Portraits: Images of 18th Century Europe.

One of the images on display is Two Sisters by the French printmaker, painter, draftsman, and pastellist Jean Baptiste Claude Richard, Abbé de Saint-Non.  This pastel is a reproduction of a Fragonard oil painting.

Another pastel on display is one my Marie Antoinette enthusiasts might recognize and will certainly appreciate.  The 31x25 oval image is of Madame Élisabeth de France - a pastel on blue paper that was created in 1787 by Adélaïde Labille-Guiard. 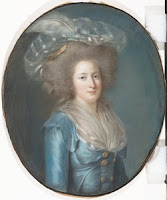 The Met describes the details of this pastel: "The simple costume the Princess wears for this study sets off her face and accords well with the gentle reserve of her manner. She wears a redingote with gold buttons and a starched fichu. A muslin cap rests on her fair hair, which is dressed wide and lightly powdered: the artist has picked out some of the individual strands in a variety of delicate colors."

Another portrait on display is of a lesser known man, Jean Charles Garnier d'Isle.  I did a little sleuthing and uncovered a few tidbits I thought might titillate you about this man and his legacy.
Read on... 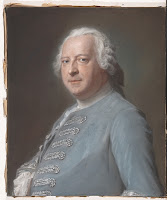 The subject of this pastel, Jean Charles Garnier d'Isle, was a famous architect in mid-eighteenth century France.

I am sure you have heard the addage, "Behind every successful man is a well-connected woman."  Well, the career of Jean Charles Garnier proves it!

By marrying the daughter of architect Claude Desgotz (one of André Le Nôtre's proteges) Garnier was introduced to the finest, and richest, members of society.  He was even chosen by Madame de Pompadour to design her gardens at Château de Bellevue (Click here to read more about the gardens at Bellevue).  Garnier worked hard on Bellevue and the chateau and gardens soon became the intimate escape of Madame de Pompadour and her royal lover, Louis XV.

Sadly, the chateau and its gardens have since been demolished.  After Louis XV's death, the castle became the property of his three daughters.  They redesigned the gardens in the popular anglais orné style.  During the French Revolution, the castle remained abandoned and was often looted.  Later, it would be demolished and new buildings would be erected on top of what had once been the wondrous gardens of Jean Charles Garnier d'Isle.

Garnier also designed the Hermitage at Fontainebleau and the gardens at Crécy.

Interesting asides about Garnier's gardens at Crécy:
Madame de Pompadour invited Boucher to tour the gardens and chateau at Crécy.  Inspired by the property (and motivated by a coffer full of coins, no doubt) Boucher would create eight paintings for the marquise’s boudoir at Crécy.  Those paintings are now part of the Frick Collection in New York.

According to the Met, "In 1747, Garnier was appointed director of the Gobelins tapestry manufactory; in 1748, he became an associate member of the Académie Royale de Peinture et de Sculpture and assumed the powerful post of controller of the Luxembourg and Tuileries palaces."

Presumably, the above portrait was created when this man was at the peak of his popularity and power.  The fleshy neck and paunchy middle suggest accustomed to fine living.  The embroidered velvet jacket, flouncy sleeves, and sausage-roll wig mark him as a man of some wealth.  His success mean little to me.  It's his countenace that truly commands my attention.  Remove the powdered periwig, look into his earnest blue eyes, and you have a man who could be anyone's grandfather.  He appears, at once, stern but approachable.  Don't you agree?