Mad About the Hatter 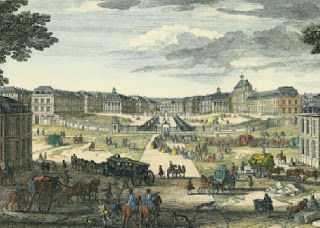 Let's pretend for a moment, shall we, that by a fabulous fluke of fate, we have been plucked from our provincial lives and dropped unceremoniously into the court of Louis XVI.

What do you think﻿ is the first thing you will notice about the wondrous world that is Versailles (that is, besides the ripe aromas of unwashed human flesh, fresh dog feces, and burning tapers)?

The courtiers that swirl around us (for we are now objects of great curiosité) are garbed in the finest fabrics money can buy.  They are embellished from the tops of their powdered heads to the tips of their buckled feet.

I concede, we must look awfully ridiculous in our skinny jeans and cashmere sweaters.

I know!  Why don't we purchase a chapeau in a style that is au currant?

After making a few discreet inquiries, we discover that there are several popular hatters in Paris and one in the village of Versailles.  But wait!  We also learn that Madame Rose Bertin, the queen's own modiste and Minister of Fashion, makes hats! 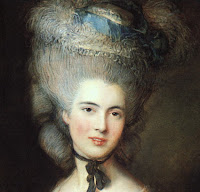 We are told that many women can not afford the elaborate court presentation gowns made by Mme Bertin, but still seek her out for her remarkable hats.  Shielding her lips with her fan, a beautiful lady dripping baroque pearls, tells us in a hushed voice that some of the most powerful noblemen give Bertin's hats to their mistresses.
We thank the gentle lady for her good tips and her gossip, and make haste for the departing choche d'osier.  After a bumpy ride atop the public carriage, we find ourselves standing on the rue de Honore, staring at the facade of Madame Bertin's Grand Mogul.

You notice a particularly fetching chapeau with a fine-pleated lace border, tulle veil, crown of Italian gauze and garnishes of rosebud branches, and a panache of white feathers.  You are about to plop it on your head until a plump, sweet-faced woman tells you that costs 120 livres (that's about $360). You wisely place it back upon the shelf and opt for a sweet, little, yellow straw hat that has been lined in taffeta, garlanded with poppies, tulips, and cornflowers, and trimmed at the back with a fluttery white feather.  With her hands clasped at her ample bosom, Mme Bertin tells us it is a Bergère Hat. 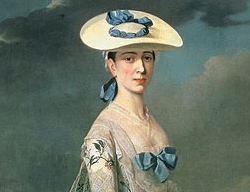 A popular hat throughout the 18th century, the Bergère Hat (French for shepherdess) was made of straw with a shallow crown and flat brim. This hat was worn perched upon the head or with the brim folded back or turned down.  A wide ribbon tied in an easy but artful bow under the chin would keep it securely upon the head.
In the portraits below, both women are wearing this type of hat.  The lady on the left, from Brittany, has a wide brim and a veil attached.  An ostrich feather and flowers adorn the brim of the lady on the right, who happens to be the famous painter Elisabeth Vigee Lebrun. 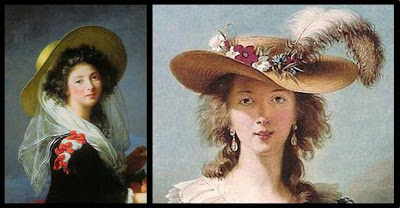 Indecisive as ever, I can't decide on a chapeau. 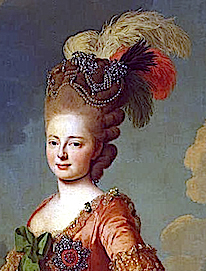 Mme Bertin suggests I purchase a fine heron feather and have Leonard, the fashionable hairdresser, work it into a new, updated coiffure. (As she says this, I notice the corners of her mouth pull down.  I detect a note of displeasure in her tone and can only assume she does not like my blonde ponytail)  I am tempted, for the feather is quite lovely, until she tells me it costs 240 livres ($720)!  A shame, really.  I would have appreciated the extra height the feather would have given my petite (short) frame.
As the door opens and a stunning woman in changeable silk and a massive powdered wig glides in the store, Madame Bertin politely excuses herself and hurries toward the visitor.
You are delighted with your little yellow straw hat and promise to help me find le chapeau parfait!  (By the way, you are proving to be a very agreeable travel partner)
We look at hat that resembles a skinnier, taller version of a top hat.  I see from the handwritten tag pinned inside it is called a sugar-loaf hat.  Despite the sweet name, it looks so silly perched on my head, it reminds me of one a trained monkey would wear.  (Secretly, I wonder if all I need to pull off this look is a tiny pair of cymbals).
I confess to being drawn to a large, black velvet bonnet hat with a turquoise silk ribbon and a riot of black ostrich feathers, but you gently suggest it might be too bold for my present attire (skinny jeans, riding boots). 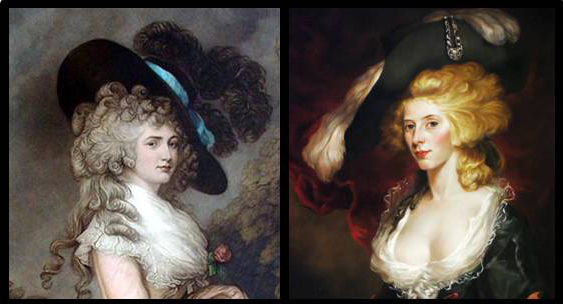 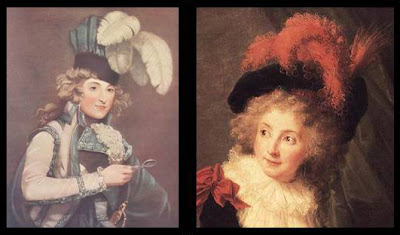 In the end, and in light of my casual attire, I settle on a jaunty tricorn riding hat.  As she is wrapping my hat up in a striped Grand Mogul hat box, Mme Bertin tells us that she made the same sort of hat for Marie-Antoinette to wear with her new burnish orange redingote.  I beam and tell Mme Bertin that as a longtime supporter of the Queen, I decide my choice was surely influenced by Serendipity! 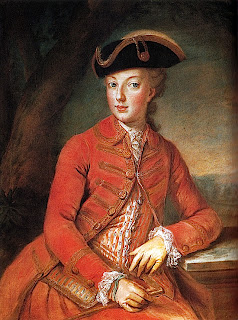