The Marriage of Archduchess Marie Antoinette & Louis, dauphin of France

Archduchess Maria Antonia of Austria and Louis, Dauphin of France, were married by proxy on April 19, 1770 in the evening in the Augustine Church of the Friars in Vienna.   At six in the evening, wearing an opulent wedding gown of cloth of silver, Marie Antoinette entered the church.  Her proxy bridegroom was her older brother, Archduke Ferdinand.  A lavish supper followed the ceremony and lasted several hours.

On April 21 at nine in morning, Marie Antoinette bid her family a tearful farewell and boarded the luxurious carriage that had been built specially for her journey from Austria to France.

"Farewell, my dearest child, a great distance will separate us...Do so much good for the French people that they can say I have sent them an angel," her mother instruced, before shedding tears of her own.

It took Marie Antoinette two and a half weeks to complete her journey from Vienna to the border of France.  She wept when she crossed the border, declaring, "I shall never see my mother again!"

On May 14, 1770, she met her grandfather-in-law, Louis XV, and her husband, the dauphin of France, in a mist shrouded forest near Compiegne.  She charmed the king, whom she would forever call Papa or Papa-Roi.  What her husband, the future Louis XVI, thought of his new bride is a mystery. Though an avid journal keeper, he did not write his impressions of the young, wide-eyed Austrian that was to share his life and tragic fate. 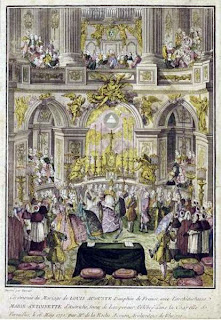 On May 16, 1770, before a crowd of 6000 nobles, Marie Antoinette and Louis were married in the Chapel Royal at Versailles.  The doll-like dauphine wore a lilac-colored gown, satin slippers, and barbes (a headdress with lace streamers that was often worn at court).  Louis wore a suit of silver.

Marie Antoinette received numerous wedding gifts, including diamonds and jewels, a pearl collar once belonging to Anne of Austria, and a diamond encrusted fan.﻿﻿﻿