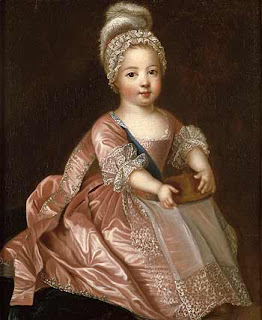 On a cloudy, unremarkable day in February 1710, a rather remarkable event occurred: a tiny, sickly infant was born in a small town outside Paris, France.  Despite many societal, medical and even political odds, the child would one-day become King of France.
The future Louis XV was born on February 15, 1710 to Marie Adélaïde of Savoy and Louis, Dauphin of France.  As the couple's third son, little Louis was given the customary title of Duc d'Anjou.

Fate played a fickle game with this royal child.  First, allowing him to be born to uncommonly loving and devoted parents.  Then, in making him an orphan shortly after his second birthday.

Sometime early in February of 1712, Marie Adélaïde of Savoy contracted measles.  Her loyal husband remained at her side throughout her illness.  By February 18, they had both died, as had little Louis' two older brothers (also named Louis).

In less than two weeks, Louis went from being the third child of two loving parents, to a royal orphan without siblings.

Great-Grandpa's Words of Wisdom:
When Louis XIV realized he was dying, he called for his five year old great-grandson.   In a voice thick with emotion, the dying king whispered to the future Louis XV,  "Sweet child, you are about to be a great king, but your whole happiness will depend on your submitting to God, and on the care you have to relieve your people of their burden. In order to do this you must, whenever you can, avoid making war; it is the ruin of the people. Do not follow the bad example I have given you on this point. Often I have started wars without sufficient cause and continuted them to satisfy my pride."

On September 1, 1715, at 8:20 in the morning, Louis XIV succumb to the painful ravages of gangrene.  His five-year-old great-grandson was now the King of France.

Louis XV By The Numbers:
Who's Who in the Life of Louis XV: