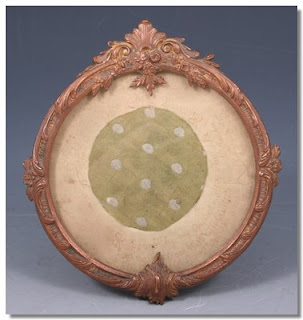 I found the image to the left on Gildings, an online auction site.

The site describes this framed item as:  "A mounted and framed piece of dress fabric, inscribed, 'Piece of one of Marie Antoinette's dresses bought by my grandmother when she was young from Marie Antoinette's femme de chambre, who was very old and poor and had to part from her souvenirs - Maria d'Accerdiaux', frame height 5½"."

Born of modest origins (She was the daughter of a clerk who worked in the foreign office), Jeanne-Louise-Henriette Campan received an education not usually afforded young women.  Multi-lingual by the time she was a teenager and reputed to have an easy manner and soothing voice, she was reader to Louis XV's three daughters.
She became lady in waiting to Marie Antoinette in 1770.  She was promoted to femme to chambre in 1786 and remained by the queen's side until forcibly parted from her on August 10, 1792 during the storming of the Tuileries.  (She wrote of her time at the Tuileries in her Memoirs, describing the indignities visited upon the royal family, of men standing outside the queen's window and shouting for her head.**)

Many of the queen's servants and friends took her personal belongings "into safe keeping" after the march on Versailles.

Some of the belongings were returned to Marie Antoinette's family in Austria and the Bourbons; some were handed down from generation to generation; others were simply sold to the highest bidder.

If you had been a member of the queen's inner-circle and en entrusted with some of her personal belongings, would you have sold them after her death?  Was Madame Campan greedy?  What are your thoughts?

**It should be noted that Madame Campan has been accused of having exaggerated her role in the queen's life and romanticizing and embellishing events described in her memoirs.

Side story:  While on a curator-led, behind-the-scenes-tour of the Palace of Fontainebleau, I was fortunate enough to see one of Marie Antoinette's desks kept in storage.  The desk had resided in the palace at Saint-Cloud and bore her coat of arms on its underside.  It disappeared from the palace during the Revolution, was lost for over 200 years, and miraculously reappeared in an antiques shop in New York City.  I can't help but wonder about the journey that desk made from Revolutionary France to America.  I also wonder how many more of the queen's possessions are knocking about the world or sitting in a display cabinet, still unidentified. ~Leah Marie Brown
Labels: Marie Antoinette Titillating Treasure