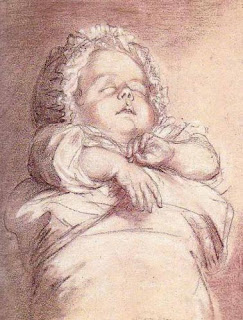 The Duchesse de Polignac, Governess of the Royal Children of France and Marie Antoinette's dear friend, was touring England when Princess Sophie died. She was, therefore, not available to provide comfort to the grieving queen.
Marie Antoinette turned to her sister-in-law, Madame Elisabeth, for comfort. She even invited the king's sister to view Princess Sophie's little corpse. (An unwelcome and unhappy invitation, to be sure)

Marie Antoinette was devastated over the loss of her fourth child, Sophie-Béatrice.When someone suggested she couldn’t have been too attached to a child who had only lived a year, the Queen responded, "Don't forget that she would have been my friend."

An autopsy was performed on Princess Sophie, during which it was discovered that the unfortunate princess was underdeveloped. It was also noted that she had been about to cut three baby teeth.
It typically cost 350,000 livres to bury a royal child of France, but because of the wretched state of the economy, Louis XVI and Marie Antoinette opted for a less elaborate burial for their beloved youngest child.

Princess Sophie was buried at the Royal Basilica of Saint Denis north of Paris.