Much has been written about Louis XVI's faithful sister, Élisabeth-Phippine-Marie-Hélène de France, but did you know he had two other sisters?

Marie Zéphyrine was a petite princess with wide blue eyes and a complexion of peaches and cream.  Born in August 1750 - four years before Louis - she would live but a short time.  In 1755, Marie Zéphyrine suffered from violent convulsions and died.   She was buried at the Royal Basilica of Saint Denis outside Paris. 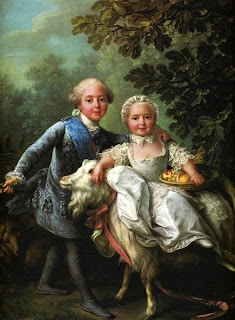 Louis XVI's other sister was Marie Adélaïde Clotilde Xavière, who was born at the palace of Versailles on September 23, 1749.  Clotilde, a plump baby, possessed a voracious appetite.  Courtiers who gathered to watch the royal family at table described her as a "round little ball" who devoured meat, vegetables, and anything else placed before her.  Her dining room antics - and ever widening mid-section - soon earned her a nickname at court - Gros Madame (Fat Madame).  In the painting above, a young Clotilde balances a plate of ripe fruit on her lap as she sits astride a goat.  Her brother, the Comte d'Artois, rests his hand on her shoulder.

When Marie Antoinette arrived at Versailles, she spent much time with her husbands sisters.  Though she liked the pretty, energetic Princess Élisabeth, she found Clotilde to be fat and priggish.

In 1775, Louis XVI arranged a match between Princess Clotilde  and Charles Emmanuel, the Prince of Piedmont (future King of Sardinia).

Despite her ever growing girth, Clotilde took the baton she was handed and sprinted with it.  That is to say, she devoted herself to her husband.  Theirs would prove a loving matrimony.

Although Clotilde never returned to France, she remained close with her sister.  When Madame Adélaïde and Madame Victoire (Louis XV's doddering, spinster daughters) fled Revolutionary France, Clotilde held out her flabby arms and welcomed them to her palace.
Labels: Louis XVI People