Paris Streets: A Cacophony of Cries 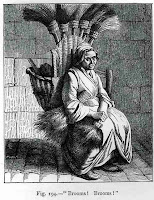 The streets of Paris in the 18th century were loud, dirty, and congested. Traders and peddlers crowded the narrow and refuge-filled boulevards, pestering passersby and loudly hawking their wares or services. From a little before sunrise until the street lamps were lit at dusk, salesmen, servicemen, strollers, and entertainers mingled and mixed. Their cries created a cacophony that was described by visitors as "discordant to the ears." (In fact, wealthy visitors often paid to have straw thrown down on the street outside the home they were renting to cut the noise of foot and carriage traffic)

If you were to travel back in time to a street in eighteenth century Paris, here are some of the cries you might expect to hear: 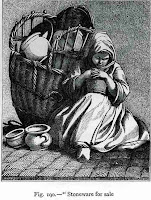 Street vendors hawked everything from kindling for fires to miniature wooden windmills. The wide variety of vendors were like a department store on legs. Rabbit skins, stoneware, old hats, brooms, prints, spoons, larding pins, lottery tickets, and lanterns were among the items for sale.

Strollers struck by pangs of hunger could stop one of the passing peddlers selling food. An oyster woman, toting a large wicker basket on her back, sells fresh oysters to cooks. Women toting large wooden platters sell fresh salad. There were also baked apples, green walnuts, fresh bread, pastries, and cheese for sale.

Drink peddlers, including winemen and coffeemen, strolled the boulevards with kettles strapped to their backs and goblets chained to their belts.
The Servicemen

Organ grinders and magic lantern girls wandered up and down the boulevards hoping to entertain a few well-paying customers, while the warbling strains of the hurdy gurdy filled the air. Magic lanterns were candle-lit boxes with painted slides, some of them of landscapes or exotic places. Animal fights and freak shows were also popular forms of street entertainment.

On Sundays at the Tuileries Gardens, criers hawked tickets for hot-air balloon rides. Hot-air balloons were relatively new, invented by the Montgolfier brothers in 1783, and wildly fashionable with the wealthy and aristocratic. 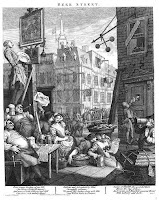 The streets were also filled with "unsavory sorts" like prostitutes, orphans, beggars and thieves. Streetwalkers were such a huge problem they were considered a public menace, and, oftentimes carted off to prison (though this didn't stop the wealthy, the aristocratic, the political, or the clergy from patronizing them). Pickpockets were rampant, particularly in crowded areas like the Market at Les Halles, the Tuileries Gardens, and Palais-Royale (the penalty of having one's hand cut off if caught stealing did not dissuade some thieves).

Horace Walpole, the English Gothic novelist, politician, and writer of copious letters, thought Paris was, "the ugliest, beastliest town in the universe.  A dirty town with a dirtier ditch calling itself the Seine...a filthy stream in which everything is washed without being cleaned, and dirty houses, ugly streets, worse shops and churches loaded with bad pictures."

Now, the good Mister Walpole should be admired for his many accomplishments, most notably coining the word "serendipity," but gentle readers must be warned that he was not very fond of the French.

Paris in the 18th century was a bustling, exciting, overwhelming, beautiful, dangerous, and noisy place. A city of commerce and entertainment. The people may be slightly different, the hurdy gurdy players replaced by violinists, and the gutter leapers replaced by cab drivers, but not much has changed in Paris in over two hundred years! 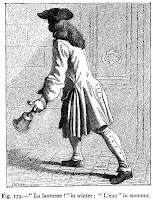 Recommended Reading To Learn More About Paris in the 18th Century:
Paris 1789

The Grand Tour by Christopher Hibbert