In some ways, the lives of children living in 18th Century France were similar to those in 21st Century America. Children were expected to show respect for their parents and work hard at their studies. In other ways, their lives were quite different. Children living then knew nothing of computers, virtual reality games, television, radio, ipods, and the Internet. So, without computer games to master, how did the child of yester-year spend their time?

Before Movies and Disneyworld

A special day out for a child in 18th century France might have included a stroll to Palais Royal, a commercial complex built by the duc de Chartres, where they could purchase a cold drink from a lemonade stall or fresh fruit from passing vendors. At the Palais Royal, they would have the opportunity to listen to musicians or watch a puppet show. After the puppet show, a magic lantern girl might be hailed for a private show. Moving or magic lantern shows were popular forms of entertainment for adults and children alike. A painted slide would be placed in a slot within a wooden box. Inside the box was a candle. When a lever was moved, the slide would be drawn in front of the candle and would appear to be moving. Magic lantern shows were usually of exotic destinations and never failed to thrill the viewer!

had not yet opened her famous museum, wax museums were wildly popular destinations for family outings. People would stand in line for long times to view the waxen images of the famous.


Acrobatic shows were also big hits with small ones. Acrobats would perform at most major parks and theaters, thrilling their audiences with twists and flips.


Before Buzz Lightyear and Barbie

Children in the 18th Century, regardless of their background and status in society, did not possess toy boxes full of diversions like the children of today. Toys were luxuries and cost a pretty penny (or livre)! Many toys were homespun; children relied on their creativity more.


Dollhouses were popular, but only with the children of the affluent. The dollhouses oftentimes were miniature replicas of their homes, right down to the linen and dishes. (If you would like to see a remarkable dollhouse of an early 18th century Federal Dining Room, click here)


Daughters of aristocratic or affluent families might have a poupée de mode - a doll dressed in the latest fashion.  Marie Antoinette given several of these dolls by dress designers in Paris before she wed the dauphin (future Louis XVI).


Toy soldiers, made of tin or metals, were the toy of choice with little men.

Children spent a lot of time entertaining themselves with games like "follow my leader."  Lower-class children would run through the streets, practically unsupervised, using Paris as their personal playgrounds. Errant and naughty children were often chased out of markets by watchmen.


Marie Antoinette's son, Louis-Charles, played with a collection of toy soldiers while interred in the Temple Prison. The soldiers, small battered toys, can now be viewed at Musee Carnavalet in Paris. To read more about these treasured toys and the unique museum that houses them, please click here.


Before Guess, Gap and Gymboree 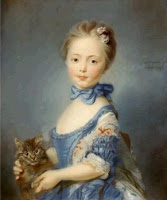 Eighteenth century children dressed differently than children of the twenty-first century. Boys and girls wore dresses until they were four or five year old. Toddlers wore a thick padding around the waist called pudding, this was meant to protect them should they tumble while learning to walk. They also wore a protective helmet called a pudding cap. After children outgrow their linen gowns, around the age of five or six, they dressed like their parents. (Click here to learn more about 18th Century French Fashions) Some upper-class children even wore powdered wigs and smallpox patches.


Another popular fashion statement were painted buttons. These buttons, with tiny scenes or portraits depicted on them, were worn and collected by children. 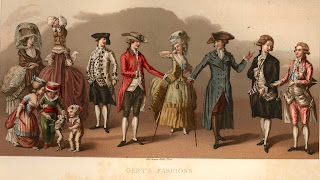 I'd love to have you join my coterie. Won't you please click the "Follow" button on the right sidebar?