"If his master be a rich man, and a charitable one, that master is being for ever applied to by the distressed, the needy, and the impostor … Hence is called into exercise the necessity for the porter's searching and discriminative eye, and his scrupulous pause before receiving a letter or answering an inquiry."  Charles Pierce, The Household Manager

Where Porters Popped A Squat
﻿
﻿

Would you believe this elegant chair was originally designed for a servant?
This high-backed, canopied chair is called a Porter's Chair. Although the porter's chair was first used in medieval England as seating for invalids and the elderly, it became popular in 18th Century France and could be found in most aristocratic homes and palaces.  In France, this chair was called a guérite (because it resembled a sentry box) or a sheperdess' confessional.

Usually constructed of wood or leather, it was placed by the front door of a chateau and used by the porter, who was tasked with screening guests and visitors.

The porter was usually a burly man, hence the rather large chair.  Since palaces and chateaux were often cold and drafty, particularly in the foyer, the porter's chair was designed with a domed top and curved sides.  This unique design helped keep the porter relatively warm.  The chair also had armrests.  Some had a notch on the armrest for hanging a lantern, while others had a little shelf attached to the armest that could be raised or lowered (like an airline tray) so a lantern could be placed upon it.

The first time I saw a porter's chair was at a chateau in Pau, France.  It was a magnificent wooden chair with an exaggerated dome and slightly tattered blue damask upholstery.  When my guide explained the chair's purpose and showed me a small, hidden compartment he said had been used to hide a weapon, my fertile writer's imagination spun a dozen stories. 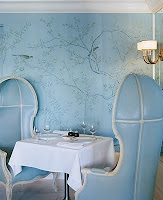 Even furniture stores are offering modern versions of this unique chair.  Restoration Hardware has a burlap-backed porter's chair "in the grand style of 18th century chateaux" they call the Versailles Domed chair.

Where Can I See An Antique Porter's Chair? 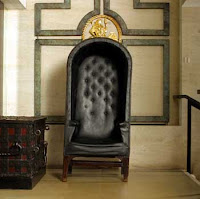 Where Can I Buy A Fabulous Porter's Chair For My Chateau?