Engraving the King's Death in Memories 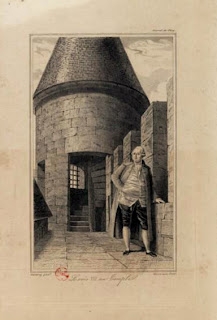 This engraving, based on a painting by Jean Francois Garneray, shows the king standing atop the turret of the Temple Prison.  He's wearing a powdered wig, waistcoat, stockings and stain breeches.  His casual stance lending no hint at the tragedy unfolding. 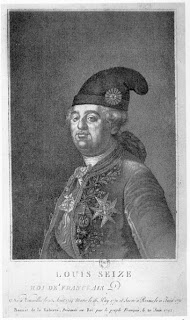 Here is an engraving of a proud Louis XVI wearing a velvet waistcoat with the Cross of the Order of Saint Louis pinned to his chest.  Although the original engraving was done in 1775, it was reworked in 1792, at which time the Pyrigian cap (bonnet rouge) was added.  The reworking and reissuing of this engraving was to commemorate the invasion of the Tuileries Palace.  On that day, the sans-culottes forced the king to place the bonnet rouge on his head. 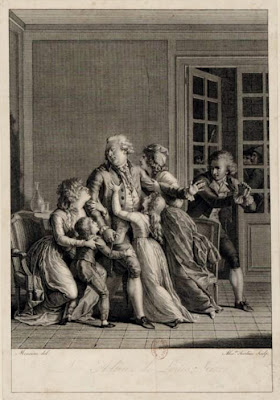 This engraving by Alexander Tardieu is entitled Les adieux de Louis XVI and depicts the king as his gives his final farewells to his wife, children, and sister.  The gentleman lunging forward is Jean-Baptiste Clery, the king's faithful valet de chambre.  Through the glass doors one can spy the sans-culottes and various Municipal Officers gathered to witness the scene. 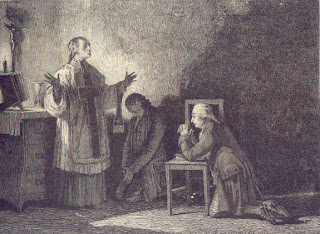 This is engraving came out after the king's execution and depicts him kneeling on the prison floor as he listens to L'Abbe de Firmont's mass.  Also kneeling, Jean-Baptist Clery, the king's faithful valet de chambre. 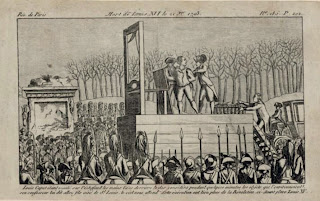 This engraving was printed in 1793 by revolutionary presses. The caption describes Louis Capet mounting the scaffold with hands tied behind his back.  It says he observes the scene around him for a few minutes.  Then, his confessor tells him to go, that heaven awaits him. 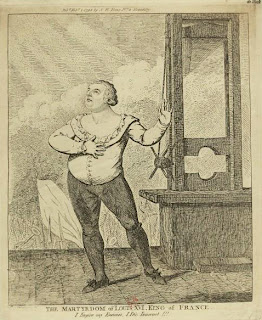 The Martyrdom of King Louis XVI by Isaac Cruikshank.  Louis addresses Heaven, proclaiming, "Forgive my enemies.  I die innocent!"  Images of Louis XVI and Marie Antoinette produced during the Bourbon Restoration were highly romanticized, often portray the tragic king and queen as martyrs. 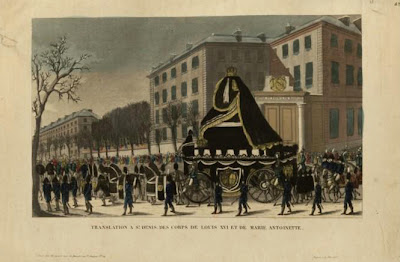 And finally, an engraving produced by Chez Hocquart of 64 rue Saint Jacques in Paris, to commemorate the internment of the remains* of Louis XVI and Marie Antoinette in the Basilica of Saint Denis.
*The naked bodies of Marie Antoinette and Louis XVI were thrown into unmarked graves and covered in quicklime.  By the time of the Bourbon Restoration, the quicklime had reduced their corpses to a few bones and some grayish matter.  There is some debate among scholars as to whether or not the bodies exhumed were really those of the king and queen.  The exhumation and reburial was used as propaganda by the Bourbons.