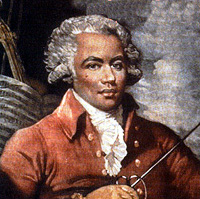 A flesh and bone man who lived a mythic life. He was, in short, a hero. Add to his character sketch that he was of African descent and it mystifies one to think he was able to accomplish so much in a time that was not kind to people of his color!

A contemporary wrote of Saint-Georges:

"He is the most accomplished man in Europe, in riding, running, shooting, fencing, dancing, music. He will hit the button - any button on the coat or waistcoat of the greatest masters. He will hit a crown-piece in the air with a pistol-ball."


He was born Joseph Bologne on December 25, 1745 on the island of Guadeloupe in the French Antilles.  His mother, Nanon, was a sixteen-year-old slave.  His father, George Bologne, was a white sugar cane plantation owner.

Although George Bologne was married, he took Nanon as his lover.  She was his only lover and Joseph, the future Chevalier Saint-George, would be his only son.
In 1747, George Bologne was unjustly accused of murder and fled to France, taking Nanon and Joseph with him.  The trio would return to their island home a few years later, after the king granted George a pardon.  But France was to be a larger part of Joseph's destiny and in 1753, he returned to attend a private academy.

Joseph would go on to study literature, horseback riding, violin, and fencing, excelling in all subjects.  In fact, he became a pupil of La Boëssière, a master of arms and a genius in the art of fencing.  Joseph soon earned the reputation of being the finest swordsman in all of Europe.

At 19, he became a Gendarme de la Garde du Roi.
﻿
﻿ It is easy to imagine the affect this young, dashing, handsome man had on the ladies of Paris, as he marched proudly through the streets in his smart uniform with the scarlet coat and gold trim.

﻿﻿
He served in the army of the Revolution, fighting France's foreign enemies, and was later appointed colonel (the first black man to ever attain the rank of colonel in the French Army).
But it was his talent with the violin that eventually drew the attention of Marie Antoinette.
﻿﻿﻿﻿﻿﻿﻿﻿﻿﻿﻿In 1774, the Queen invited the Chevalier to the palace to perform for her and her coterie.  The Chevalier's magical ministrations with his bow managed to impress Marie Antoinette and the two became fast friends.
To read more about the Chevalier Saint-George, please read The Chevalier

de Saint-Georges: Virtuoso od the Sword and the Bow by Gabriel Banat or click here to be linked to an impressive, online biography.
Further Reading: