In Defense of the Queen 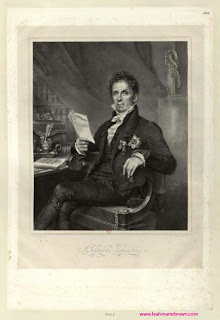 Although he had proven himself to be an extremely astute lawyer, he as given the queen's case one day before her trial -  hardly enough time to formulate a winning defense against the many charges levelled against her.

The Ministry charged Marie Antoinette with "conspiring with her brother against France and for sending him money; of organizing a counter-revolution; of forcing Louis Capet to veto the deportation of priests; of appointing perverse Ministers; of hatching the plot of 10 August by keeping the Swiss guards continually drunk and by herself biting sit their cartridges; and generally of starting civil war." (Louis and Antoinette, Vincent Cronin)

She would also be accused of adultery, lesbianism, and incest.  The latter charge surely had to have cut her through, but when asked to respond to the outrageous charge, she calmly replied, "If I have not answered, it was because Nature refuses to answer such a charge against a mother." 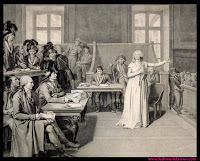 Although he lost the Queen's case and his client suffered the ultimate punishment, Lagarde was still accused of having defended the queen


He went on to defend Madame Elisabeth, Louis XVI's sister.  Lagarde also defended General Francisco de Miranda (a Venezuelan general who was a supporter of the Girondists), Charlotte Corday, Madame Roland, and Louis Marie Florent, the duc du Chatelet. Defense of the latter would subject him to charges of anti-revolutionary actions and earn him the nickname, "Liberator of the guilty."  He was arrested, spent six weeks in prison, and was released on 27 July 1794.
Labels: 18th Century Paris Louis XVI Marie Antoinette People Politics