﻿﻿
﻿﻿﻿If one is willing to wade through the copious listings of trashy Halloween costumes and creepy Madame Alexander dolls, eBay can provide an invaluable education and endless entertainment for the enthusiast of the Life and Times of Marie Antoinette.  I occasionally visit the online auction site and type the term "18th century French" into the search engine box just to see what comes up.  Sometimes I find titillating treasures like antique snuffboxes, scraps of embroidered silk, or hand held firescreens.

A few weeks ago, I found an antique wax seal that I just had to share with all of you.  (As you may know, wax seals were used for hundreds of years as a way to identify the sender, authenticate the document, and to verify that the document had not been opened by someone other than for who it was intended.)

The seller described the item as being an extremely rare wax seal used by the  Commune de Mauvezin de Lille during the First French Republic.

As you can see from the photograph, the seal depicts a fasces (a bundle of sticks with an axe blade emerging from the center, a traditional symbol of power from Roman times that was used by the First Republic) with a liberty cap on top of it.  On the inside circle are the words Republique Francaise.  The words along the outer ring read Commune de Mauvezin de Lille.


The seller indicates in the listing that there is still period wax stuck inside the seal.  How amazing is that?  I can't help but wonder which sorts of documents were sealed using this wax seal.  Perhaps it was used to seal official papers condemning a royalist - an enemy of the Republic - to death.

Boucéel's owner, told me that one of his ancestors had been a member of Marie Antoinette's court.  Apparently, as the mob was marching on Versailles, this faithful courtier secreted several of the queen's private items, including one of her royal wax seals.  Later, after the queen's tragic demise, she returned the items to the Hapsburg's in Austria.  She received a touching letter, filled with praise for her loyalty, which the Comte was gracious enough to show me.

I wrote the seller, Mike of Valley Forge Antiques, and discovered that he found this titillating treasure at an antiques market.  (I generously offered to accompany him on any of his future outings to markets, just in case he needs an extra pair of hands to tote his incredible French finds) 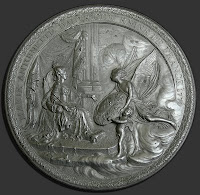 Side story:  Marie Antoinette used a seal on her letters and official documents.


While visiting Château de Boucéel, a bed and breakfast situated in an 18th century chateau in Normandy, I heard a remarkable story about one of Marie Antoinette's seals.


The Comte Régis de Roquefeuil, the owner of the chateau, told me that one of his ancestors had been a member of Marie Antoinette's court.  When the mob marched on Versailles, she quietly gathered a few of the queen's belongings and kept them hidden throughout he revolution.  After Marie Antoinette's tragic death, the Comte's ancestor returned the items to the Hapsburg's in Austria.  The queen's brother wrote a note of thanks, commending her for courage and faithfulness.

Today, the letter is preserved and kept in the Comte's private library.  Fortunately, he was gracious enough to allow this Antoinette fanatic a moment to gaze upon it.If you had been part of Marie Antoinette's coterie, which of her objects would you have chosen to secret away in those stormy first days of the Revolution?  And, how many of her titillating treasures are yet to be discovered?


I'd love to have you join my coterie.  Won't you please click the "Follow" button on the right sidebar?
Merci beaucoup!
Objects of Interest: