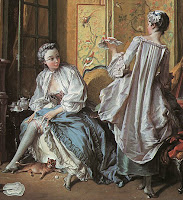 This week's Tuesday's Titillating Treasure was actually inspired by the Boucher painting at the top of this blog (also miniaturized and featured to the left of this paragraph).

If you look in the lower left hand corner of the painting, you will notice three items strewn on the floor:  a bellows, which was used for increasing the draft of the fire, a feather duster for cleaning the soot, and a handheld fireplace screen.

This week, we will focus on the last object, the handheld fireplace screen.

Eighteenth century women were well aware of the hazards of standing too close to an open flame.  With rooms being lit by flickering candles and heated by roaring fires, a woman's voluminous gown or towering powdered wig made her living, breathing kindling.

Many women suffered public humiliation, injury, or even death when the hems of their gowns or their wigs caught on fire.  For those of you who have seen the movie The Duchess, starring Keira Knightly, you might recall the scene where a wretched, drunken Georgiana staggers into a candleabra, and suffers the great humiliation of having her smoldering wig snatched off her head and doused with punch.  Sadly, that scene was more fact than fiction.
﻿﻿
﻿﻿

Besides being dangerous, a roaring fire was a bloody menace, melting many a Mesdames meticulously manicured faces.  No aristocrat wanted their artfully applied (primarily wax-based) costmetiques to slide off their cheeks and onto their gowns.  Bon dieu!  Imagine the mortification!
﻿ ﻿

And so, the handheld fire screen was created.
Made of canvas, silk, wood or paper, these portable fire screens could be used by a chic countess or delicate duchess to shield her face while still allowing her to warm the rest of her body.  They might be embroidered, hand-painted, embellished with lithographs or gems, or carved out of wood.
﻿I found this pair of eighteenth century handheld fire screens for sale on an auction site.  The owner indicated the screens were made of silk covered board and decorated with lithographs showcasing the hats of the Court of Louis XVI.  The screen on the left is the Maid of Orleans and the screen on the right is a Chapeau a la Colonnie (Hat of the British Colony).

This magnificent early nineteenth century handheld fire screen is made of wool, wood and canvas.  The handle is turned bamboo and the canvas is embroidered with roses and fruit.  A delightful peach and cream colored fringe borders the screen and must have looked marvelous as it swished about.
Today, this amazing object is housed at the Stranraer Museum in Scotland.

Did you know that a pair of eighteenth century embroidered handheld fire screens made in Dieppe, France sold at auction for almost ten thousand dollars?

I'd love to have you join my coterie. Won't you please click the "Follow" button on the right sidebar?
Merci beaucoup!